At the 2011 Sundance Film Festival, the Ford Foundation launched JustFilms with a five-year, $50 million commitment to support the art and impact of independent documentary work. Singular among major foundations, Ford has been at the center of the growth of this field since the late 1960s: JustFilms can trace its DNA back to the early days of public television, the media arts center movement, community media and public access, and the American independent film movement that continues to grow today. And so when Orlando Bagwell, then the program’s director, hailed JustFilms as the foundation’s latest commitment to creative film storytellers, it was a powerful moment.

At the time, I was the director of the Sundance Institute’s Documentary Film Program and Fund. We became one of JustFilms’ three major partner grantees, working to strengthen a creative, entrepreneurial, and passionate independent film community that was coming up with new ways of thinking about cinema and impact, expanding its audiences around the globe, and attracting an unprecedented wave of talented artists.

With that commitment and alongside our partners, JustFilms has helped fuel extraordinary growth in independent film and new media across the world. Together we have spearheaded vital conversations about artistry, storytelling, impact, and engagement. We have spurred the completion and launch of exceptional films and new media projects. We are exploring filmmaker safety and security. We are working to map the deeper dynamics of film and social change.

As the period of our initial commitment comes to a close, JustFilms is entering a new phase. Today, we’re looking at ascendant forms of immersive storytelling, like interactivity and virtual reality, which transports us in ways we couldn’t otherwise experience (as The New York Times has shown, launching its virtual reality efforts with a set of powerful stories about children displaced by conflict). We see expanding opportunities for filmmakers in swiftly evolving digital journalism platforms. The leaders in human and civil rights are increasingly using visual storytelling in legal proceedings and to build leadership in communities. Regional hubs of film funders and training programs have emerged around the world, connecting artists with local communities, donors, and others interested in making a difference. And we are supporting new generations of diverse leaders in independent film. All of this helps create communities of makers and viewers eager to experience film and new media stories that are thoughtful and authentic—and that above all, help us gain a greater understanding of the many dimensions of lived experiences and the choices we make.

Sitting at the nexus of the non-profit sector and the marketplace, independent documentary production and distribution is both vocation and avocation. To newcomers, it can seem both a tribal and chaotic kind of life. The field is filled with fierce, devoted practitioners who often work multiple jobs to support their filmmaking. Those drawn to telling stories that speak to contemporary reality and matter to communities and countries alike see their art as a way to impact the world. It is their contribution to greater justice.

Audiences are responding to these stories, and finding outstanding examples through broadcast, cable and Internet platforms. Indeed, the number of theatrical releases and multi-platform launches has been increasing steadily in the past five years, but financial profit remains limited. But a new logic is emerging: More and more, these projects are valued for the significant social return on investment they generate, as they help create conditions for transformational social, cultural, and political change. And yet, despite the growing profile of documentaries, the field that supports them remains sorely underfunded.

From its earliest days, JustFilms has been an effort to fight that—to bring greater resources to important work, and to provide both experienced and less seasoned artists and media-makers with the tools they need to tell stories that matter. In this next chapter of our work, our commitment continues. Over the past few months and into next year, we’re underscoring this latest generation of Ford’s dedication to the power of film and new media storytelling through a series of events showcasing the accomplishments of three of our major American partners: The Sundance Institute, the Independent Television Service, and the Tribeca Film Institute (see details at the end of this post). Events featuring other grantees will highlight exemplary new films and explore a new vision for social justice cinema.

Good Pitch NYC, an annual event run by our grantee BritDoc, represents a vital (and now global) model for training, pitching, and resource expansion. This year’s installment, held in October, was a great success, yielding new partnerships, new sources of funding, and deepened skills for artists and film strategists. Also this fall, with Queens council member Daniel Dromm and the Queens World Film Festival, JustFilms hosted the premiere of Frederick Wiseman’s 43rd film, In Jackson Heights, in the very same neighborhood where it was filmed. The foundation has proudly supported Wiseman’s unflinching documentary work since the 1970s, when independent documentaries were funded in part to create a unique stream of content for the newly forming public television system. Over 250 community members attended this latest screening—many of whom saw themselves in the film. 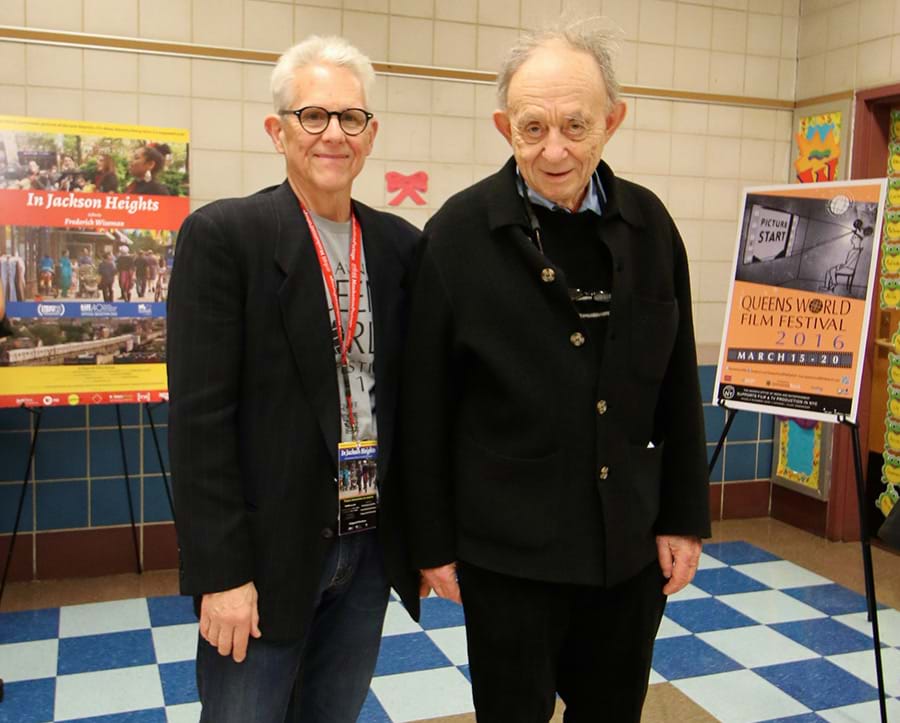 And so as 2015 draws to a close, we celebrate the strides made, the careers supported, and the transformative storytelling that has emerged over the past five years of JustFilms—and the ways our own understanding of impact and social change have deepened as a result.

Please note that the following events are by invitation-only. For more information, email [email protected]