How we move forward during the year ahead

With the new year comes a new beginning, an opportunity for reflection and renewal.

And yet, a month into this new year and decade, the promise of the New is already overwhelmed by the Old—by climate crisis and geopolitical crisis years in the making; by crises of misinformation, online and off; by crises of inequality in opportunity, voice, and progress.

Day by day, we lose ground to fire and fear, corruption and cynicism, partisanship and polarization. As authoritarianism and nationalism advance, democratic values and institutions remain in retreat.

The hits keep on coming. And while depletion, depression, and “democracy grief,” as one columnist called it, are perfectly understandable reactions (I’ll confess, I feel it sometimes, too), they do nothing to douse the flames or calm the fury.

This week in the United States, we honor the life and legacy of Dr. Martin Luther King Jr. and it feels fitting to heed his timeless call: the urgency of now—of our now—has never been fiercer.

To me, embracing this urgency—harnessing its power to carry us closer to justice—is the defining task of this year, and of every day and hour ahead. This is a time to step up, not check out—a time to reenlist, reengage, and reconnect, both with each other and with the deep, abiding optimism at the heart of the democratic creed.

We must ask ourselves: How do we escape the maelstrom, and elevate the makers and markers of progress? How do we move beyond the constant harm and hurt—and move toward the healing and reconciliation we crave and the real change we so desperately need?

These are not easy questions—and they defy obvious answers. No doubt, we must strive to understand the world in its fullness and complexity. But with justice as our guiding light, I remain hopeful that we can make our political and economic systems more inclusive—and, in turn, repair and rebuild our trust in one another.

I find myself reflecting, often, on one of my heroes, Congressman John Lewis, who fought for justice alongside Dr. King and is courageously facing a new fight against cancer. Five years ago, Congressman Lewis invited me and a number of leaders to join him on a pilgrimage across the Edmund Pettus Bridge in Selma, Alabama—the hallowed ground where he and thousands of others had marched directly into unimaginable violence, changing the course of America’s civil rights movement and democracy forever. As we commemorated the 50th anniversary of what we now call Bloody Sunday on that modest bridge, we affirmed a sacred conviction, in the congressman’s words, that “love will conquer hate” and “hope will conquer fear.” 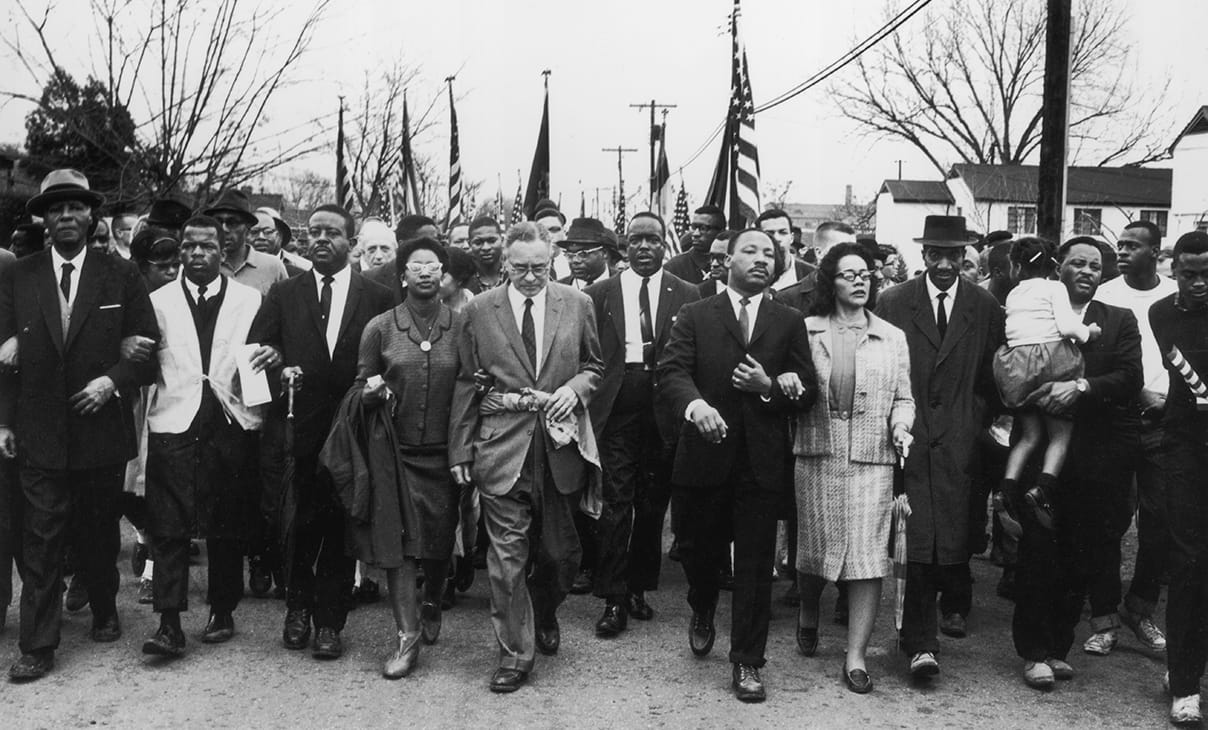 A 24-year-old John Lewis (second from left) leads the march in Alabama. 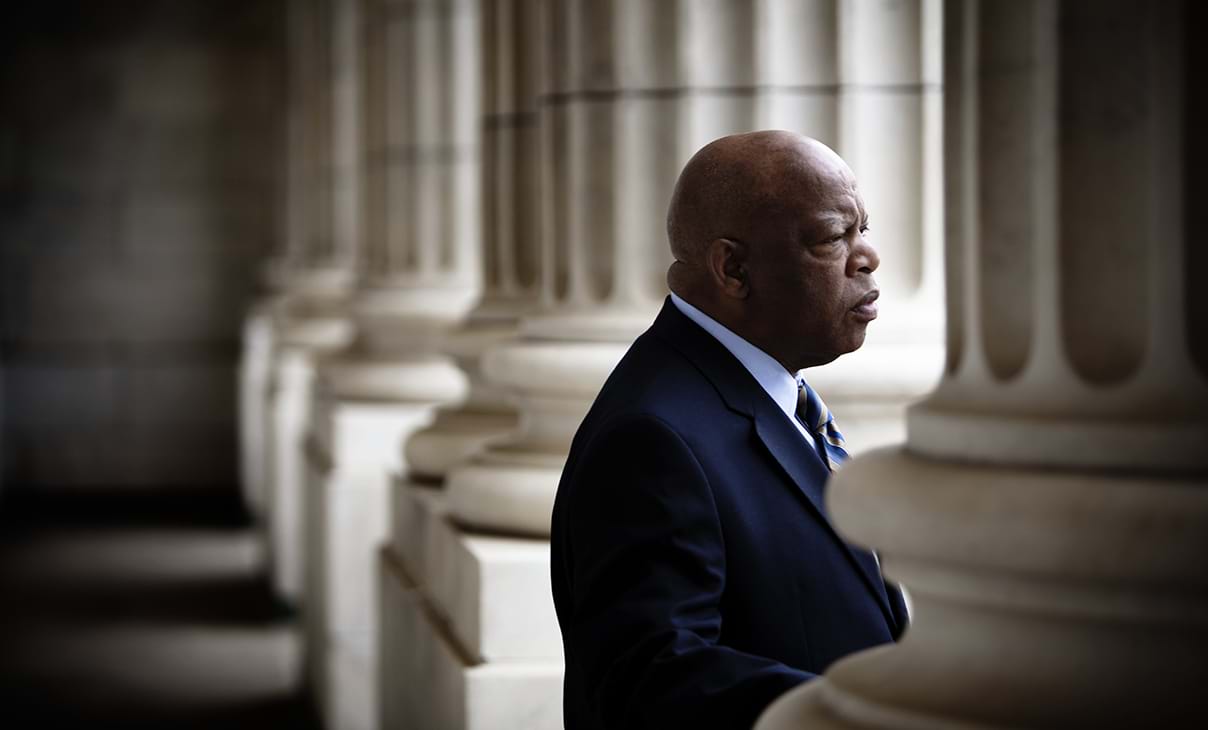 Congressman John Lewis outside his offices in Washington, DC.

We also recognized the tremendous power of sacrifice and struggle. As the congressman once said, we cannot “get lost in a sea of despair” because “our struggle is not the struggle of a day, a week, a month, or a year; it is the struggle of a lifetime.”

Around the world today, we are seeing examples of sacrifice abound, particularly from young people, women, people with disabilities, rural and indigenous communities, and people of color. Kynan Tegar, Greta Thunberg, Artemisa Xakriabá, and the youth who are leading movements to stop climate change, and the millions of everyday citizens in places like Chile, Haiti, Hong Kong, India, Lebanon, Mexico, and Sudan who are demanding more transparency and equality, more dignity and democracy, are proving themselves worthy heirs to the legacy of Congressman Lewis and the many courageous individuals throughout our global history who have put their safety, their bodies, and, at times, their lives on the line in the name of justice.

The truth is those who are committed to, and fighting for, social justice are no strangers to sacrifice. Many courageous champions of change have sacrificed, and will continue to sacrifice, for the most righteous of reasons.

But we must ask why those with the least tend to sacrifice the most, while those with the most power, the most resources, the most privilege, and the most potential to do good tend to resist the transformational change that would produce a world with more justice? Why are well-positioned people capable of making the changes we need so hesitant to do more? What new crisis needs to befall us before we, together, are spurred to collective action?

Too many unaffected by the inequities of our day remain at a remove, holding themselves apart, exonerating themselves for their complicity in systems in desperate need of repair. I believe to rebuild trust, the people who benefit most will need to sacrifice more—whether resources, comfort, or power.

At the end of last year, we hosted a conference on the future of philanthropy, and I was struck by the philosophy that has driven Luis Miranda Jr., longtime activist and father of Lin-Manuel Miranda, throughout his life: “If it doesn’t hurt … then you’re not giving enough.”

This conception of sacrifice is profound: Only when it is uncomfortable, even painful to give of ourselves, only when your life makes a meaningful shift away from something you otherwise might want, do you know that you are giving beyond your own benefit.

In this way, sacrifice is the expression of so much of what I’ve explored in From Generosity to Justice, which aims to push philanthropy to address the root causes, rather than merely the effects, of injustice. Sacrifice is giving selflessly, yes, but also on behalf of others—on behalf of justice. 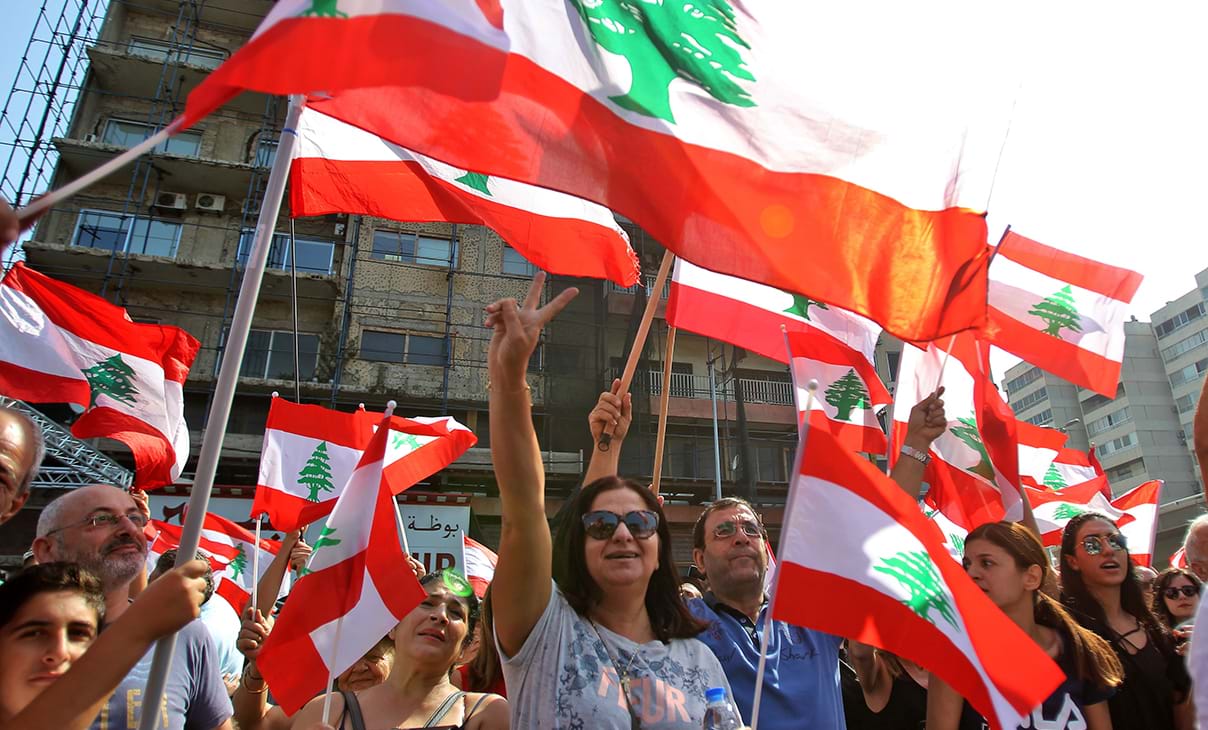 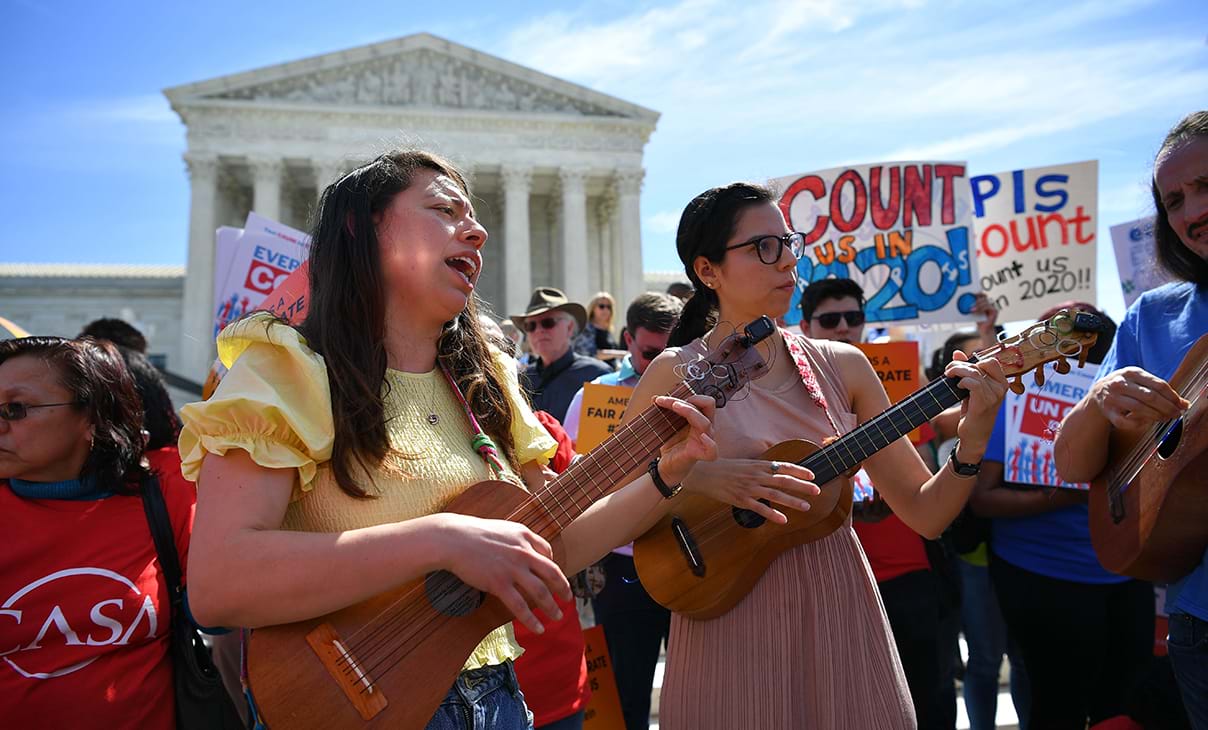 Crowds gather in Washington, DC, to remove the citizenship question from 2020 census. 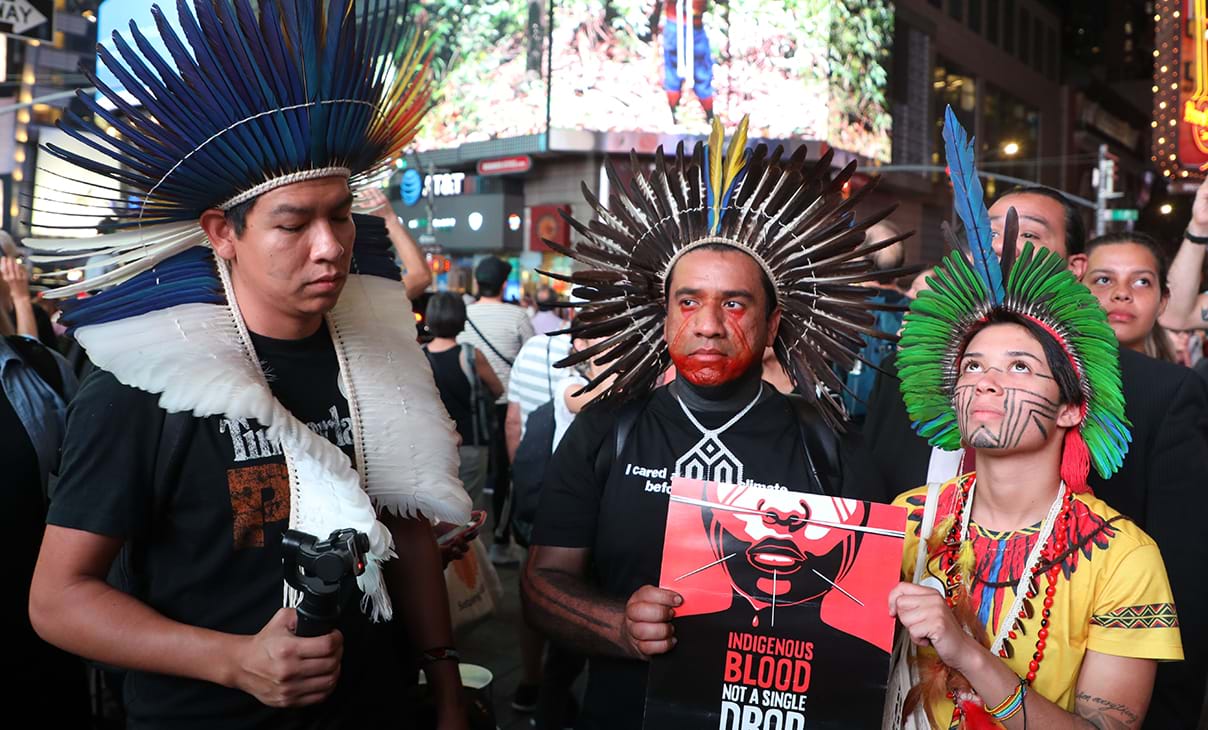 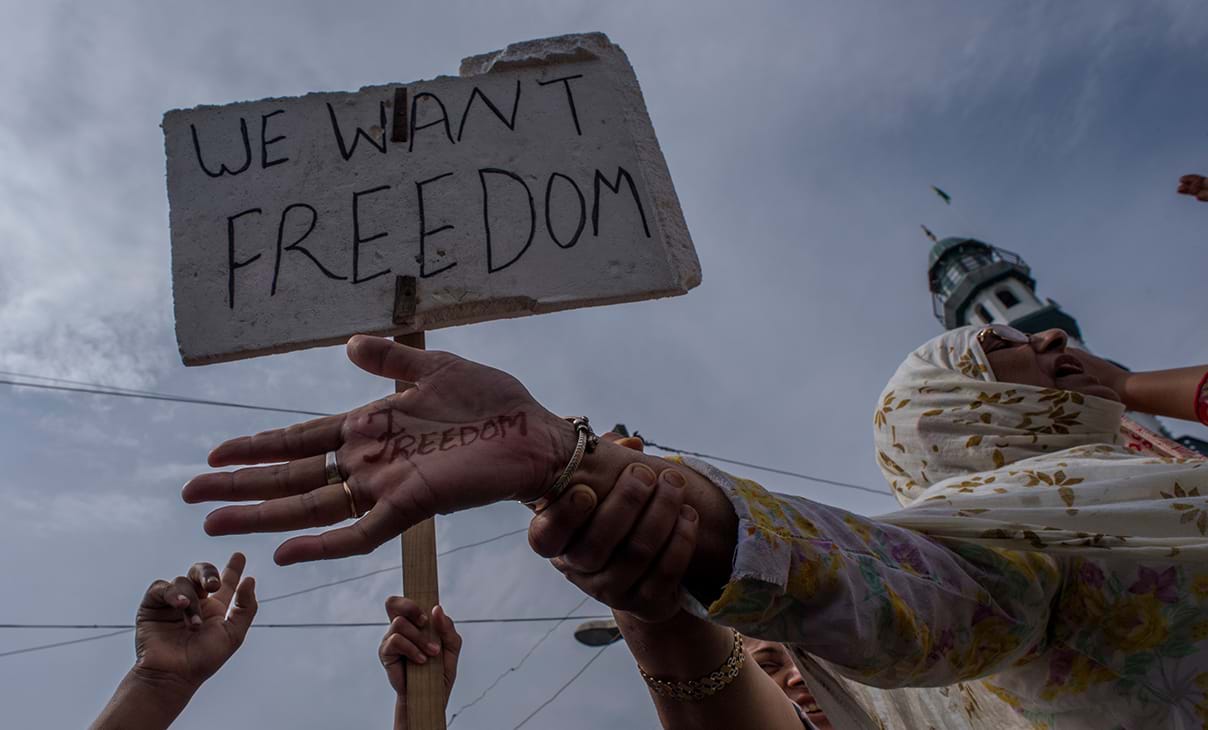 Women and girls of all ages peacefully protest throughout India for their security and freedom.

So, if you are someone who benefits from tremendous good fortune and privilege, consider how you can contribute to your community in a way that, to use Miranda’s word, “hurts.”

Perhaps that means paying a higher tax rate to increase public resources to solve our collective challenges, or devoting more effort toward attacking the root causes of injustice. Perhaps it means asking, honestly, which system, status, or status quo you are willing to step away from or challenge to benefit others?

This kind of sacrifice—the willingness to put the needs of others ahead of oneself—has a value beyond what is given up. Sacrifice speaks volumes. Sacrifice reminds people that we are bound together, that we share a destiny, and that we all are better served by mutual trust and respect than mutual contempt.

No doubt, the sacrifices we must make—during 2020 and beyond—will be difficult. But now is not the time to tire. Now is the time to try—and try again. Dr. King reminds us that “every step toward the goal of justice requires sacrifice, suffering, and struggle.”

We need to lay a new foundation for an inclusive future with more inclusive economies. We need to marry good intentions with more meaningful actions. And we need to demand more sacrifice from our leaders—too many of whom are more eager to stay in power than use their power to address the old crises that will shape yet another new year.

And so, let us embrace a radical kind of hope. Let us inspire each other to sacrifice more. Let us commit to the hard work of hope so, even as division and discord take center stage, we can keep our eyes on justice as both our guiding light and the ultimate prize.

I hope more leaders will reduce the inequality of sacrifice, which is critical to achieving inclusion and fairness. I hope we draw from that potent combination of urgency and patience, of optimism and realism, of faith and action, and start to build a future that benefits each and every one of us.

Here’s wishing you strength for the toil and triumphs ahead in 2020.