Nearly a generation ago, the Ford Foundation pivoted to focus much of its economic programming on expanding opportunities to build wealth, through promising but largely untested approaches to “asset building.” Rigorous scholarly research, such as Michael Sherraden’s Assets and the Poor (1991) and Melvin Oliver and Thomas Shapiro’s Black Wealth/White Wealth (1995), had underscored the powerful consequences of lacking wealth, as opposed to merely lacking income, and called out the stark racial wealth gap that persisted in America. In 1983, white households had eight times more wealth than black households. 1

In order to address this divide, entrenched over time by structural racism, the foundation worked with a diverse array of partners, going beyond the traditional, limited focus on income gaps, to enrich the public debate and demonstrate scalable solutions. The racial wealth gap had shrunk somewhat by the early 2000s, demonstrating that measurable progress is possible, but the 2008 financial crisis and its aftermath reversed that progress. By 2013, white households have a median net worth 13 times that of black households, according to Pew Research Center analysis of the Federal Reserve Bank’s Survey of Consumer Finance. The persistence of economic inequality and of race as a fault line in our country have helped revive the debate on reparations for slavery, and given it new traction in the halls of Congress and the news media.

In this context, the Ford Foundation commissioned the Roosevelt Institute, a leading voice on what it will take to create an economy that works for all, in partnership with the Haas Institute for a Fair and Inclusive Society, a university center renowned for its work on racial equity, to conduct a retrospective evaluation of the foundation’s initiatives to tackle the racial wealth gap, the impacts of these initiatives, and their limits. Roosevelt Institute fellows Andrea Flynn and Rakeen Mabud recently published their findings in a report called Ford Foundation Racial Wealth Gap Evaluation, which summarizes these findings and also shows how, going forward, we as a nation can build on lessons learned over years of experimentation, analysis, business and program innovation, and policy reform—to tackle the racial wealth gap with effective solutions on a scale big enough to make a real difference. 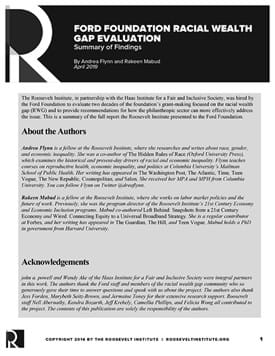 1. We need to focus on unequal wealth, not just incomes, and seek structural change.

“Although increasing wages and making work safer and more secure are critically important to improving economic security for all communities, especially for communities of color, Ford-funded research has demonstrated that doing so will not necessarily address the underlying factors driving racial inequity and will not substantially move the needle on the RWG.

“Closing the RWG and enabling families and communities of color to build and sustain wealth will require acknowledging and addressing the various historical and current drivers of racialized wealth inequities, some of which have traditionally been a part of RWG conversations—intergenerational transmission of wealth (or a lack thereof for people of color); exclusions from the labor market, housing, and education; a range of wealth-stripping mechanisms that disproportionately deprive families of color of wealth and drive them into debt—and others that have not been, such as unchecked corporate power, new investments in public goods and programs, and expanding democratic participation.” - page 3

2. Supporting scholars and practitioners of color has helped spread awareness and clarify the systemic problems driving the RWG.

“The foundation’s extensive investments in research on the RWG and in promoting scholars and advocates of color have propelled the issue into mainstream conversations about economic and racial inequality and have seeded a network of experts who are now leading the field. Scholars and practitioners in the fields of economic, racial, and gender justice have a clear understanding of the importance of wealth and are knowledgeable of race- and gender-based wealth disparities.” - page 4

“The hope was to engage people closest to the problem in developing solutions and as such the foundation funded the creation of a network of experts of color focused on documenting, analyzing, and developing proposals to address the RWG.” - pages 7-8

“We heard from nearly every individual we interviewed that this was one of the most important and effective of Ford’s efforts on the RWG.” - page 12

3. Making big bets on promising policy solutions, like “baby bonds” and other kinds of child savings accounts (CSAs) and access to affordable homeownership, is smart practice for philanthropy.

“… the foundation’s big bets on child savings accounts showed that such programs could be operated at the state level and that low-income families could successfully save.” - page 4

“We can and should think big in terms of risk-taking and narrative development. Many of our interviewees expressed interest in working with others on bold and ‘risky’ projects—those that involve experimenting with and testing ambitious solutions not yet seen in practice, as Ford did with the SEED [CSAs tested nationally, led by community-based organizations] and CAP [community advantage program, which helped low-income households get low down payment mortgages] demonstrations … One interviewee told us, ‘Too often, we get channeled into these little, tiny, barely incremental investments, versus these “rip the floor out” investments that could really make powerful change.’ Risk-taking was also perceived as important for building power on the ground and advancing solutions.” - page 17

4. Some popular and tested approaches, such as promoting individual savings, do not do nearly enough to close the gap.

“This was one of the least successful aspects of Ford’s RWG work … While Ford was investing in individual-based asset-building approaches, the research being published by Ford-funded scholars showed that while building assets of families of color would be critical, it alone would not close the gap in a meaningful way. Research that demonstrated how structural and historical drivers were responsible for racial wealth disparities showed that the minimal savings that poor and low-income families could accumulate would not enable them to build a financial cushion sufficient to waistband the wealth-stripping mechanisms exacerbated by a skewed economy. This was especially true for families of color, who were starting far behind their white counterparts in terms of asset accumulation, thanks to historical exclusions, and who were also disproportionately likely to fall prey to wealth-stripping mechanisms, such as the criminal justice system, housing discrimination, predatory lending, that were driving them into debt.” - page 11

5. The RWG is a structural and historical problem, not primarily an individual one. So, our boldest solutions need to be structural too.

“The problem is structural and historical, not individual. For more than two decades, academics believed that individual savings among low-income families and families of color was a critical mechanism for closing the RWG. However, Ford-funded research explained the critical role that the intergenerational transmission of wealth—the ability of families to pass savings from one generation to the next—plays in perpetuating the RWG. It illustrated the ways in which historical and present-day exclusions in the labor market, housing, education, and so many other domains compound with existing economic rules that disproportionately strip wealth from low-income families and families of color, affecting economic opportunities and outcomes across generations. Ultimately, this research points to the multifaceted and structural solutions that address the root causes of the RWG. Unfortunately, many individuals and organizations that focus on the RWG continue to approach the issue through an asset-building lens, which obscures the structural components of wealth inequality and the systemic levers that could be pulled to address it.” - page 15

“It’s crucial to focus on structures, not individual behavior. Any effort to build assets among traditionally asset-poor communities must take a system approach to eliminating the structural barriers that hinder asset building rather than on changing individual behavior.” - page 16

There are many important lessons in the report, and its message is much more than retrospective. Our current program strategies to disrupt inequality continue to reflect some of the biggest lessons learned over the past two decades.

For example, over time, the Ford Foundation and other funders began to provide critical support for consumer protection against predatory lending, criminal justice reform, and other drivers of asset stripping. These reforms matter for everyone, but they matter most of all for people of color and the poor, and they remain hotly debated and under-resourced. In general, philanthropy has struggled to match the scale, range, and persistent intensity of these multiple, interlocking systems that hold workers and families back—often trapping them in debt and poverty for years or even generations. In part, as the report shows, that’s because philanthropy—both private and corporate—continues to focus primarily on relatively individualized asset-building approaches, such as household savings programs, rather than the wider spectrum of structural reforms needed.

But it can’t just be philanthropy that tackles structural drivers of the racial wealth gap: Government and private institutions have critical roles to play. One of the most important is to do less harm: As a nation, we will always work at cross purposes, and compromise our most cherished and shared values, if we expand opportunities to build wealth with one hand while perniciously stripping it away with the other.

It’s also important that we not get caught up in a false choice of individual versus structural reform. Significant progress will require a combination of both. As careful research on the racial wealth gap and economic inequality has shown, fair structures that offer real opportunity work in part by helping individuals make the best choices they can and then make the most of those choices over time—in education, the labor market, housing, financial services and other arenas that define “opportunity for all.” That combination also suggests the pillars of a new and durable social contract—between government, business, and communities—to expand opportunity and reward the efforts that millions of struggling workers and families make every day. This, together with inclusive democracy, is the core of the American experiment and one of our greatest sources of strength as a nation.