I’ve been traveling in India this week, visiting our office in New Delhi (which was the foundation’s first outside the US) and meeting with our partners around the country. On Wednesday our India team and I joined staff from PRADAN—an organization we’ve long supported—and made our way to Teliya, a village in the Gumla district of rural Jharkhand state, deep in a land of hills and terraces, at least 20 minutes off the main road.

PRADAN (Professional Assistance for Development Action) was co-founded by Deep Joshi, through grants he made as a Ford Foundation program officer in the early 1980s. For the past 30 years, the organization has focused on empowering India’s poor, rural communities, working collaboratively with villagers over long periods.

In 1998, PRADAN helped the village of Teliya began its transformation from a remote village with a bleak future—severe food insecurity, malnutrition, and almost no cash—to a thriving place with year-round cash crops and other products that are sold to markets nationally. This all started with the “self-help” group suggested by PRADAN, which brought the village’s women together to support one another, access financial and public services, and spearhead changes that affect the whole community.

Women are using "the power of the Sari" to hold local governments to account and help their villages thrive in a global economy.

Teliya’s self-help group encouraged the women to save what little they could. The five rupees each woman scraped together over the course of months was the start of community resource-sharing to make investments that have completely changed the prospects of the village’s 77 families. PRADAN focuses on women because they are disproportionately disadvantaged among India’s poor—and incredibly effective at creating change in their communities. Staff describe how self-help groups spark powerful transformations in these women: They’ve watched as they shed shyness and hesitation to become keen representatives for their communities’ rights and aspirations.

With small moves year by year, villagers have adopted new habits: Introducing new farming practices, agitating for an improved road (and getting it), saving enough money to engage banks and acquire simple irrigation equipment like water tanks, mapping the village land and rethinking what’s planted to produce year-round yields and income, negotiating with local officials for national and state grants to which they are entitled, and installing the village’s very first toilets (which actually opened on the day we visited). 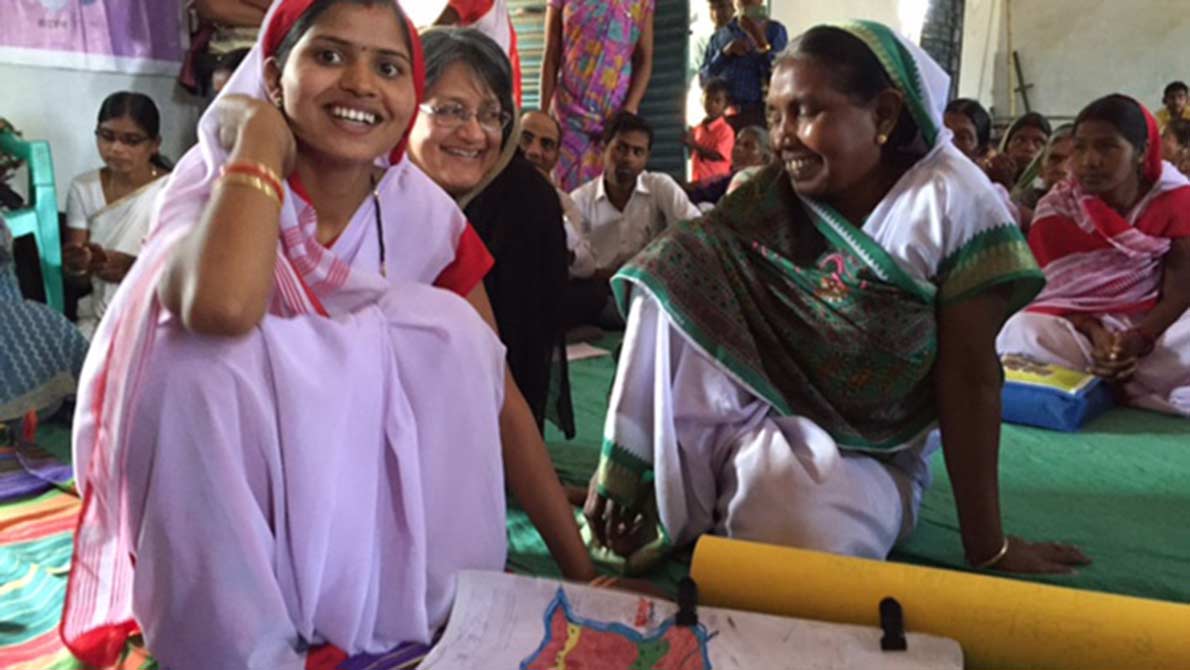 Several women explain the way the villagers have mapped their land and resources. The map shows the better soil areas, irrigation systems that have been built, water tanks that have been created, orchards planted, and other assets the village has organized.

PRADAN’s role here is as a supportive partner, strengthening villagers’ ability to do the work of improving their community for themselves—and in doing so, to find new confidence, agency, and purpose. And the results go beyond one village: Nearby villages have seen the benefits of Teliya’s approach and are replicating its model. Local and state authorities are taking note of what’s working. The federation of women’s self-help groups has grown into a network representing 36,000 families across the district, making it a potent force for good. And PRADAN is working with communities in eight states across India, expanding the scale of the organization’s work—and its impact.

This is what true leadership development and community building looks like. It was electrifying to see.