Beyond Inclusion and Toward Justice

Five years ago, my Ford Foundation colleagues and I announced that we would commit to disrupting inequality in all its forms. In the weeks that followed this pledge, I received hundreds of emails. Most of them were congratulatory, but a few called my attention to the same oversight: I had failed to acknowledge the pervasive inequalities people with disabilities face every day—and, in turn, a community that has been disregarded for far too long.

This piece is part of Disability Demands Justice, a dynamic, ever-evolving hub to deepen our understanding of how disability intersects with social justice.

While reflecting on this glaring omission, I revisited a passage from James Baldwin: “Ignorance, allied with power, is the most ferocious enemy justice can have.” I noted, then, that our definition of power must expand to include privilege—the unearned advantages and preferential treatment we receive based on our identities and experiences. I said then—and feel even more strongly today—that our ignorance, when allied with our privilege, can be equally, if not more, detrimental to justice.

As an organization devoted to justice, from racial justice to economic justice, our ignorance of the injustices experienced by the disability community was not only unacceptable; it was completely at odds with our mission.

Today, as we face the compounding effects of the COVID-19 crisis and the anti-black racism codified in our social systems, we must take an intersectional approach—and when we do, the reality of ableism is undeniable. People with disabilities have been disproportionately affected by this pandemic, whether facing greater risk of contracting the virus or accessing critical support they need at home. Black people with disabilities are subject to police violence, making up between one third and one-half of police killings. At this moment, justice for people with disabilities is not just urgent; it’s a matter of life and death. 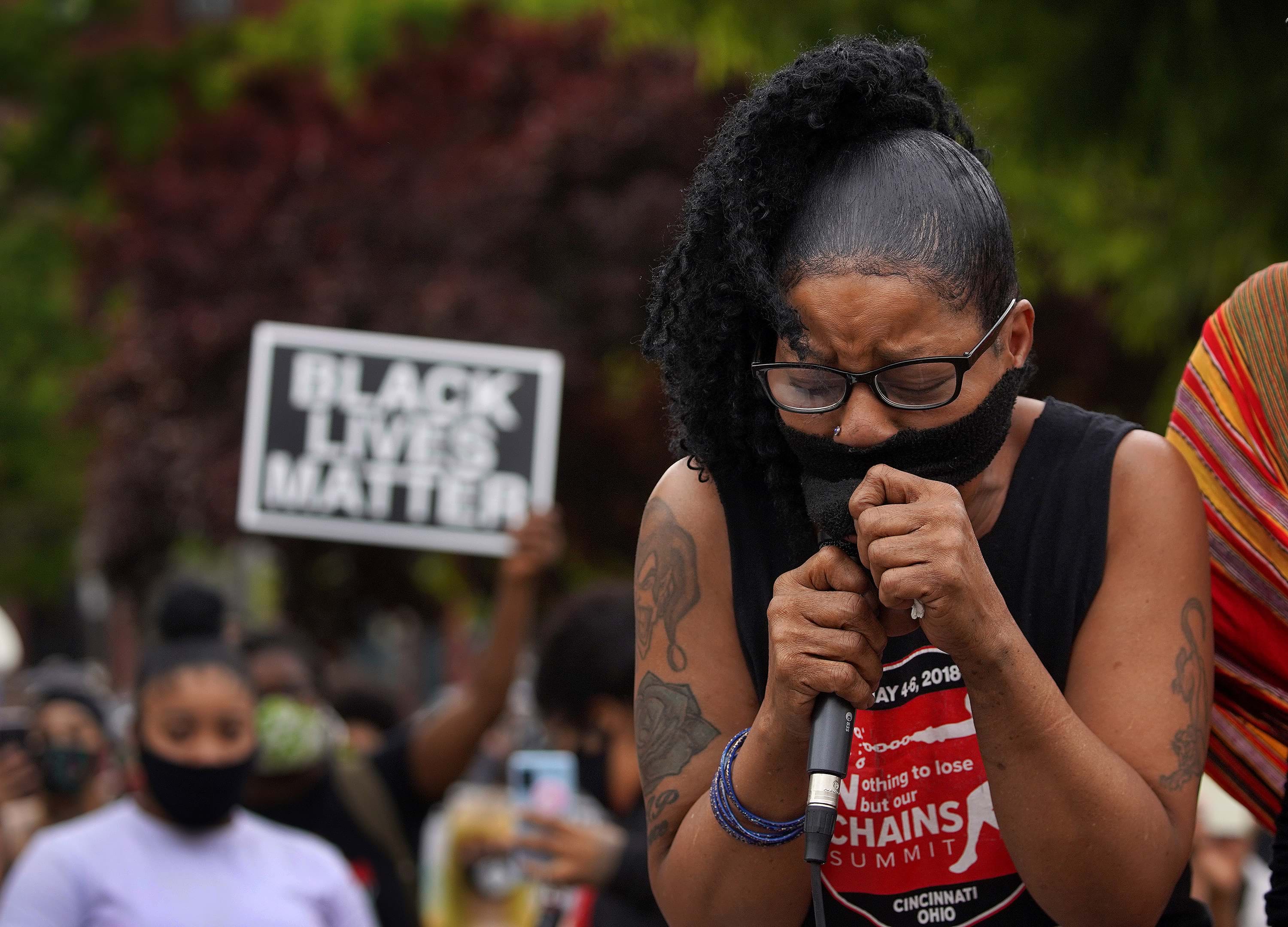 A protester speaks out against the murder of Terrence Coleman, a 31-year-old black man with a mental health disability who was fatally shot by police in Boston.

Back in 2015, I promised that we would do better: We committed to integrate disability inclusion into everything we do—and we have started this work and made considerable headway. But we’ve also learned what’s involved and realized this is a journey that won’t be completed in a matter of months, or even years.

But that hasn’t deterred us. In fact, it inspires us to keep forging ahead as we commemorate the work that led to the Americans with Disabilities Act. We have made mistakes and will continue to make them because that is part of the work. Undoing and unlearning ableism in our organization, in the social justice sector, and in the broader philanthropic community will not be linear or simplistic, but it will be transformative.

A Commitment to Listen, Learn, and Do Better

After making our commitment, we quickly recognized the importance of the mantra at the heart of the disability rights movement, “Nothing about us without us.” So we’ve convened and consulted with disability-rights activists and advocates at every stage of our journey.

One person who influenced us in profound, powerful ways is Judy Heumann, a leader in the fight for disability rights who served as a Ford Senior Fellow from 2017 to 2018 and remains an advisor to the foundation. She was a key player in the remarkable, hopeful, and must-see documentary Crip Camp: A Disability Revolution, which we proudly supported through JustFilms. As both a thought partner and truth-teller, Judy drew on her storied career as an activist—lovingly documented in her new memoir Being Heumann—to teach and advise us. Her report on changing the face of disability in the media remains a concrete road map for living up to the ideals of equity, diversity, and inclusion to which we all aspire. Time recognized her as one of the 100 most important women of the past century, and we couldn’t agree more.

Judy also introduced us to the iconic Marca Bristo, founder of Access Living and an unparalleled disability rights activist from Chicago. Last year, we were thrilled to have Marca join our board but then devastated when she passed away before our first meeting together. Our time together, her deep resolve and the honest counsel she offered live on in our memories.

Thanks to Judy, Marca, and too many other teachers to name, we’ve grown as both individuals and as an institution. And by listening and learning with humility, we’ve come to realize that disability is even more deeply intertwined with the broader cause of social justice than we initially thought.

Just like race, class, gender identity, sexual orientation, and immigration status, living with a disability is an intersectional identity. We must understand how the inequalities faced by people with disabilities interact with the larger ecosystem of oppression that marginalizes women, low-income people, communities of color, immigrants, and LGBTQ+ people.

For example, one in three women globally experience some form of violence in their lifetime, but women with disabilities are 10 times more likely to endure this injustice. In the United States, black families hold one tenth the wealth of a typical white family, but black people with disabilities are even worse off with 60 percent more likely to live in poverty than their white counterparts. 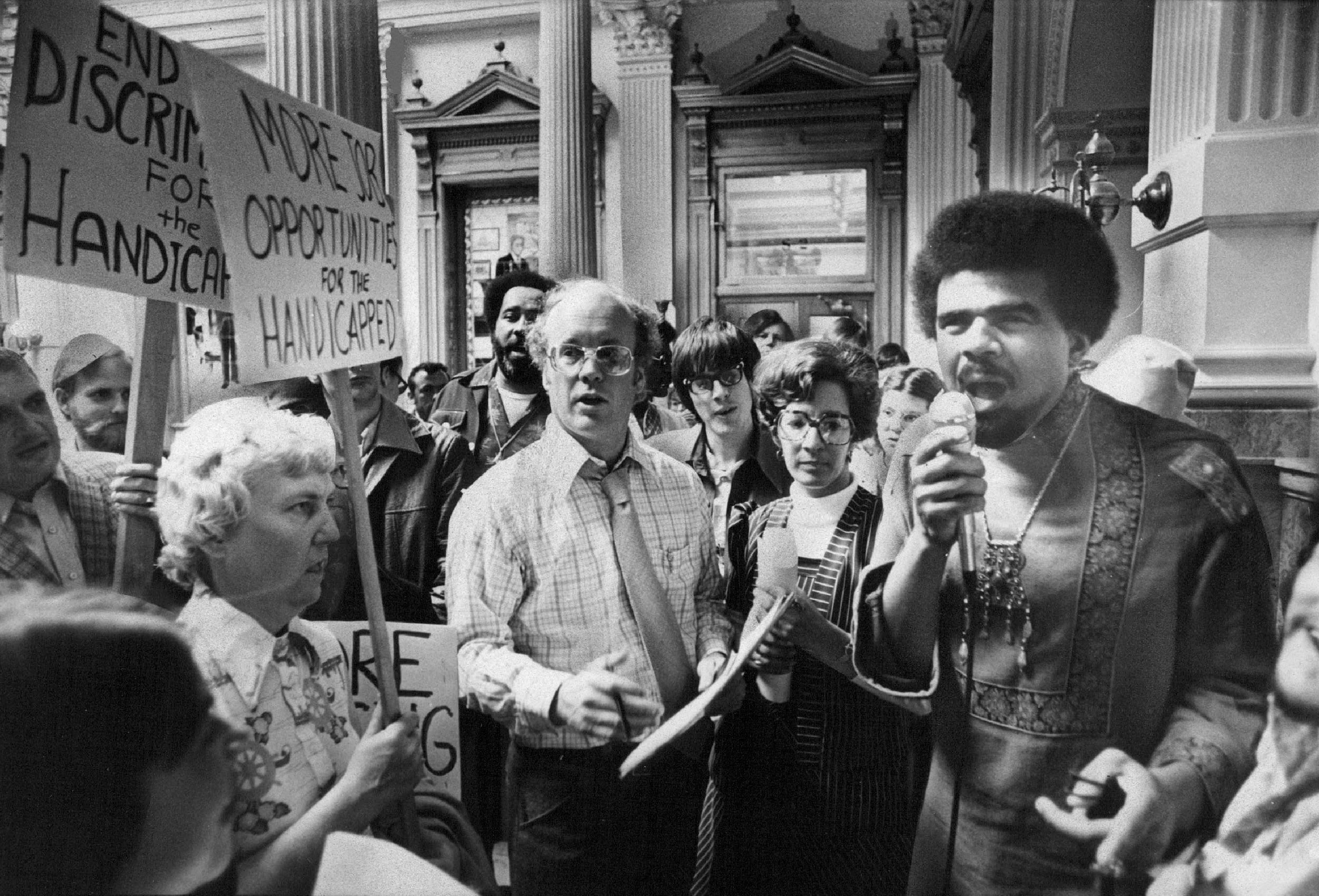 Disability rights activist Don Galloway, speaking here to a crowd, sat at the intersection of two marginalized communities demanding equal rights and became an important pioneer in the fight for both disability and racial justice.

Despite the disproportionate impact of inequality faced by people with disabilities, especially by those who are multiply marginalized, our social justice efforts have historically viewed disability as a medical issue. By doing so, we’ve failed to include people with disabilities in our organizing, hiring, and leadership development. As a sector, we have never fully considered the 1 billion people around the world living with a disability who belong to every identity group.

It strikes me that, for some reason, many of us accept limits and excuses we would never tolerate in a different context. Upending centuries of patriarchy to achieve gender justice is no easy task, but would we simply give up? Uprooting anti-black systemic racism is a tremendous undertaking, but would we say it’s too difficult and move on? If queer people were only recognized when their queerness was “visible,” would we not push for a more comprehensive understanding of queer identity?

Why do we allow ourselves, our organizations and our networks off the hook when it comes to people with disabilities? Why don’t we recognize that building a more just, equitable world is a vision we all share?

There can be no justice without disability. Disability demands justice. In fact, a tenet of disability justice, developed by Sins Invalid, holds that “No body or mind can be left behind – only moving together can we accomplish the revolution we require.”

It’s time we start recognizing this and pushing ourselves. After all, without reflecting on the many intersections with disability, without integrating that lens into all of our programs and policies, without addressing internalized ableism in our organizations, there will be no justice. And that takes real commitment, time, and hard work.

Future Forward: Where we’re at and where we’re going

Over the past five years, we’ve made meaningful strides forward. We’ve changed our operations through large measures, like renovating our New York headquarters to comply with the Americans with Disabilities Act (ADA) and continuing to incorporate more accessible features, and smaller fixes like ensuring all internal IT trainings have closed captioning. We’ve invested in anti-ableism training for our staff and are continuing to revise and refine our hiring and recruitment strategies to create a more equitable team globally. Critically, we’ve brought a disability lens to our grantmaking to find how new and existing grantees can advance disability rights and justice into their work. Over the last two years, we’ve invested more than $20 million toward projects and organizations specifically focused on disability and additional $60 million to social justice organizations working toward disability inclusion. 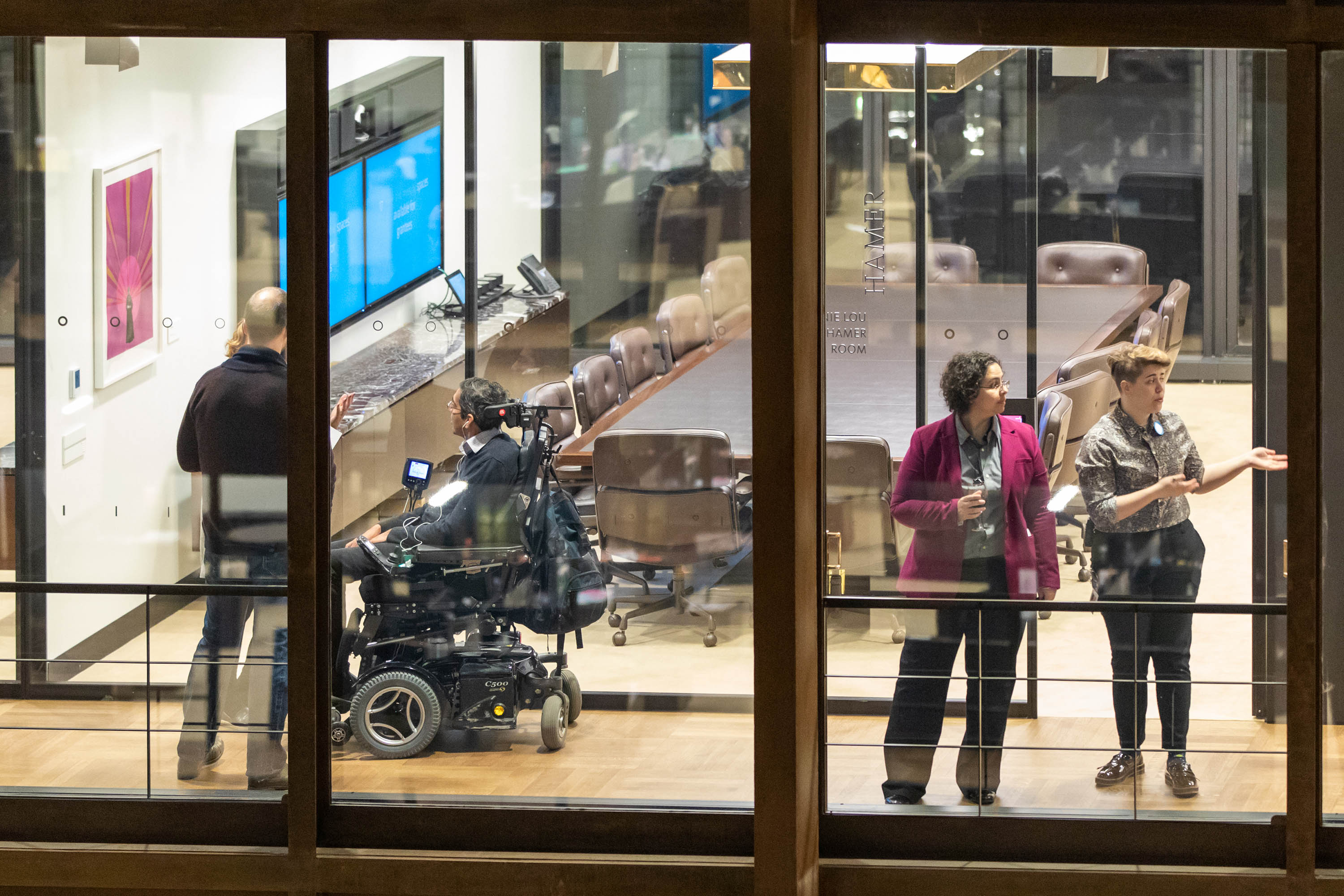 In an effort to live our values, the Ford Foundation Center for Social Justice was redesigned to be ADA-compliant and more inclusive than ever before.

Beyond our own institutional progress, we’ve also partnered with other foundations to amplify disability issues within the philanthropic community. Richard Besser, president of the Robert Wood Johnson Foundation, and I co-chair the President’s Council on Disability Inclusion in Philanthropy. This high-level working group, launched just over a year ago, includes 14 other foundation presidents who are passionate about advancing disability inclusion within their foundations and the sector at large.

Most recently, the council launched the Disability Inclusion Fund to provide resources to US-based organizations run by and for people with disabilities through participatory grantmaking. The fund also made a round of rapid-response grants in the wake of COVID-19 and will begin regular grantmaking later this year. We hope the work of the fund will build the strength of the disability movement and teach us more about how philanthropy can be a better partner to the disability community.

But disability-rights organizations, long underfunded and understaffed, cannot dismantle ableism alone. While people with disabilities must be the vanguard of the fight, social justice organizations can and should serve as essential allies.

Celebrating the ADA and Working Toward Justice

This Sunday marks the 30th anniversary of the Americans with Disabilities Act. Like so many other legislative victories in the fight for civil rights, this historic law wasn’t only produced in the halls of Congress. The ADA was birthed in town halls and community forums across the country—long before federal legislation was even possible. For decades, disability-justice activists and allies have fought to make people with power and privilege see that disability rights are civil rights, and civil rights are disability rights. And even after 30 years of the ADA, the movement—and the work—continues and evolves.

That’s why I’m proud to share “Disability Demands Justice,” a multimedia initiative designed to deepen the Ford Foundation’s and the social justice sector’s understanding of disability. It will elevate the voices of disability leaders from whom we have much to learn, share the efforts and lessons of social justice organizations working at the intersections, and connect individuals and organizations with the tools and resources to make a difference.

We also will share in more detail our own journey and what we’ve learned. But this campaign is not a Ford Foundation project; it’s meant to be a dynamic, ever-evolving hub where a diversity of voices and perspectives can share their experiences, activists and organizations can teach one another, and where meaningful partnerships can take shape. With every new connection, we’ll collaborate to generate stories and resources that push the conversation, and the movement, forward.

Of course, we recognize that not everyone is at the same place on their path to make disability indispensable to their work. Our goal isn’t to call anyone out, but rather to call everyone in. Only by working in partnership will we create a future where all are truly equal.

Together, we can break the silence of our collective ignorance and affirmatively declare that rights for people with disabilities are human rights—that disability is social justice.

We hope you’ll join us throughout this launch and partner with us in the months ahead. With your support, I know we can answer the call of justice, with clarity and purpose.

This piece is part of Disability Demands Justice, a dynamic, ever-evolving hub to deepen our understanding of how disability intersects with social justice.