On a field visit in 2014, I witnessed something that made me truly understand how important it is for people to have access to information. As I arrived in a small village in Malindi, a coastal town in Kenya, I saw a woman walking purposefully to join a small group already seated under a tree. The woman, whose name I later learned was Amina, had a small radio in her hand.

Amina sat down and quickly took control. “Today’s program will focus on gender-based violence,” she said, introducing a radio program to the group who had gathered to listen. “It will teach us about our rights.” Twice a week, these 15 women come together to take part in a “radio listening group”—a scene replicated in more than 60 groups across the region where marginalized women gather to listen to and learn from the radio. To watch these women interact and engage in lively discussion after listening to a program is to see firsthand how the power of information can transform society. 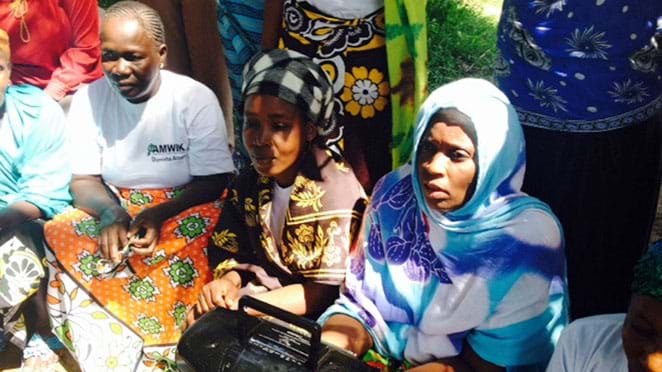 Women gather to take part in the radio listening group.

“This radio is a key that is unlocking our future,” Fatuma, a member of the radio listening group, told me. “It is such an important tool in my life, I cannot live without it.” From listening, women have learned how to access the UWEZO Fund and its resources for women’s economic empowerment. And they have also learned how to get involved in Kenya’s devolved governance structure. “This small gadget called radio has really opened our eyes, to the point now everyone is now calling us ‘Mama Radio,’” explains Kadija, a member of the group.

The literacy rate in Malindi is 68 percent, but the majority of women remain uneducated—due in part to traditional practices, like early marriage, that inhibit their opportunity. The media tends to avoid covering such issues; as a result, many women see little reason to pay attention. In the mainstream media, programming that targets women has typically subscribed to a narrow interpretation of gender issues, focusing on women’s roles as wives, mothers, and homemakers, without addressing their political and economic needs.

The Association of Media Women in Kenya has fostered these listening groups and other kinds of community education, making information accessible to isolated, marginalized communities in northern and coastal region in Kenya. The Ford Foundation has supported this work, as well as the Association’s efforts to create public awareness around key issues affecting women, and to ensure public support for and appreciation of women as leaders.

Recently, a team of Ford Foundation staff returned to Malindi to visit its new, full-fledged digital resource center. Boasting computers and Wi-Fi, the center connects rural women with the information they need to improve their livelihoods and empower themselves. Having grown out of the modest radio listening groups, it has become a true information hub. 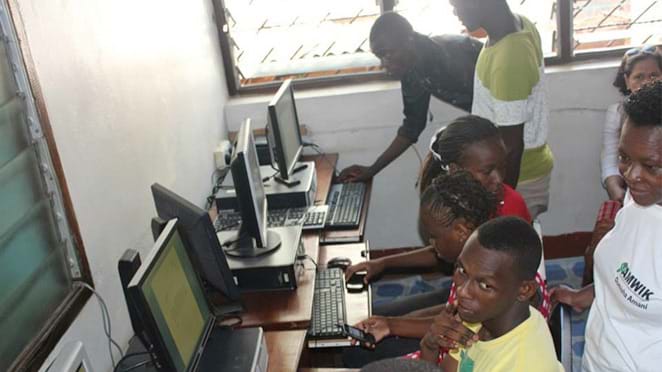 Today, more than 150 women regularly come to the center to listen to the radio and take part in public debates. The center has enabled the women to access information about important issues and much-needed government services. After being trained to use the center’s computers, the women are now learning how to use online marketing and social media to expand the market for their handcrafted products, including sandals and baskets. Extending computer training to the public provides them with another opportunity to generate income.

Through the center, local women of all ages are finding it easier to overcome traditional barriers to expression and opportunity. They are speaking up and embracing newer communication technologies, such as text messaging, that help them engage, participate, and hold their governments accountable. “We have become powerful to the point that no bills can be passed through the County Assembly without us being consulted,” one woman says.