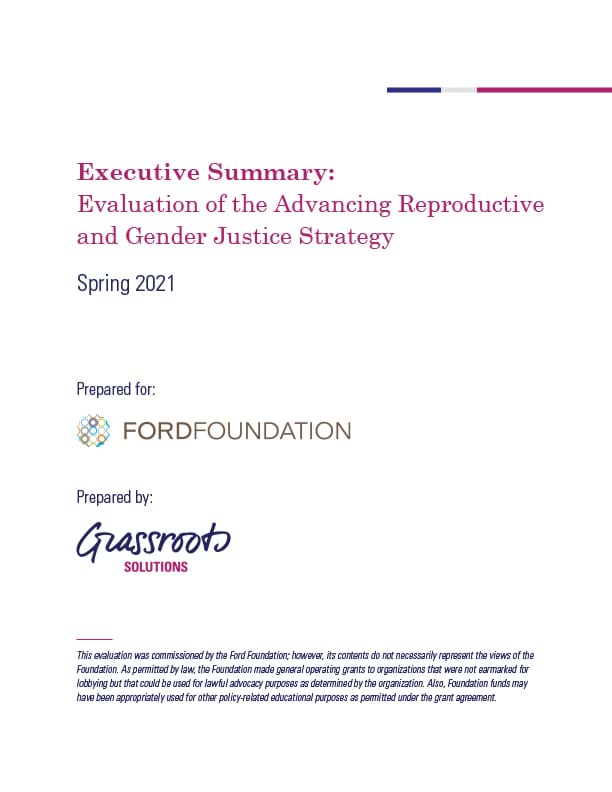 The Advancing Reproductive and Gender Justice strategy was developed and approved in Spring 2017 in response to decades of growing and persistent threats to access to reproductive healthcare and gender rights. At the time the strategy was developed, the US was seeing an increase in laws criminalizing abortion, efforts to defund abortion providers, and ongoing debates over the Affordable Care Act and Title X, all of which disproportionately impact women and people of color.

At the outset, the foundation decided to utilize a reproductive justice analysis and center women of color, low-income, rural women, LGBTQ+, and gender non-conforming/non-binary people as the agents of change to guarantee the physical, mental, spiritual, political, economic, and social well-being of women and girls. The team supported grantees that addressed the intersectional needs of the people and communities most impacted by reproductive and gender injustice. In this way, the team sought to push against a common response among traditional progressive issue advocates to isolate abortion from other justice issues relevant to the lives of every person in the U.S.

Between 2017 and 2020, the Ford Foundation’s Advancing Reproductive and Gender Justice program made 123 grants to 66 organizations, totaling approximately $59 million, to support efforts to guarantee that all women—particularly women of color, low-income women, gender non-conforming/non-binary people, and rural women—have the ability to choose whether to have a child and when, to give birth safely, and to raise children in a healthy, thriving environment.

To achieve this long-term goal, the foundation supported field-building and advocacy activities aimed at realizing a variety of near term (1−3 years) and intermediate term (3−5 years) outcomes. The foundation’s key approaches to implementing its strategy included providing multi-year, general operating grants to reproductive rights and justice and gender justice organizations; funding regional and state-level organizations that center reproductive justice; providing communications research and other data to reproductive justice organizations and their allies; and convening key sexual and reproductive rights, health, and justice funders with other social justice funders.

In spring of 2020, Grassroots Solutions, in collaboration with Nicole Robinson and Squakr, partnered with the Ford Foundation to evaluate this strategy and provide information to facilitate learning and decision-making about where to focus moving forward. The evaluation began in May 2020 and concluded in December 2020.

There has been an increase in the number of women of color who occupy leadership roles among organizations in the reproductive, health, rights, and justice field. Grantees shared that the foundation’s long-term grants supported women of color to participate in professional development programs to enhance their knowledge about how to lead and run an organization, build networks, and develop a vision for themselves as leaders. That said, although significant progress was made toward the foundation’s desired outcome, women of color leaders still require continued financial and other kinds of support to ensure adequate representation at the national level.

2. Since 2017, women of color-led organizations have increased their influence and leadership over the agenda of the reproductive and gender justice field.

3. The ability of reproductive and gender justice organizations to take advantage of emergent opportunities and withstand substantial challenges improved significantly between 2017 and 2020.

The foundation’s multi-year, general operating grants helped reproductive and gender justice organizations hire more staff, expand the geographic reach of their programming, and invest in technology infrastructure like new accounting software or computers. Grantees also cited the rapport foundation staff built with them as key to helping grantees adapt and navigate challenges. Several seismic events in 2020 put these organizations’ resiliency and ability to respond to the test.

4. Since 2017, strides have been made to organize and align key funders and organizations to defend legal abortion pending a potential repeal of Roe v. Wade.

A cornerstone of the progress made to date is a collaborative effort of nonprofits and funders organized by the Ford Foundation, which got underway toward the end of 2018. However, progress to align sexual and reproductive rights and justice funders was slower in 2020 because of staff transitions at the foundation and the fact that the pandemic put an end to in-person meetings for the participants. Minimal progress has been made to align philanthropic funding for interconnected social, racial, and gender justice efforts.

5. Since 2017, substantial progress has been made to demonstrate the “winnability” of reproductive and gender justice issues at the state and local levels.

The Ford Foundation’s support for regional and state-based organizations to promote community-led reproductive justice policies, and defend against regression in a tier of blue and purple states was successful. At the same time, progress to enact favorable state policies in some regions occurred against a backdrop of backsliding on abortion rights and contraception access in 22 southern and midwestern states.. Decades of investment by the opposition to consolidate congressional and executive governing power created especially unfavorable conditions to prevent losses, specifically around abortion access and restrictions to Title X (federal) funding that caused many reproductive health clinics to lose funds.

6. Steps to create alliances in Ford’s priority states were successful, and alliances helped advance laws and policies supported by the Ford Foundation’s grantees.

The foundation fostered intra-field collaboration through information sharing and creating spaces for grantees to build community. While alliances were strengthened among gender and reproductive justice organizations, there was less progress made to establish cross-issue alliances that incorporated gender and reproductive justice issues into the agendas of other social justice organizations. However, the public controversy over the nomination of Justice Kavanaugh to the Supreme Court galvanized collaborations between reproductive rights organizations and multi-issue groups.

7. Progress to shift language in the public discourse from a conversation about “reproductive rights” to “reproductive justice” was mixed.