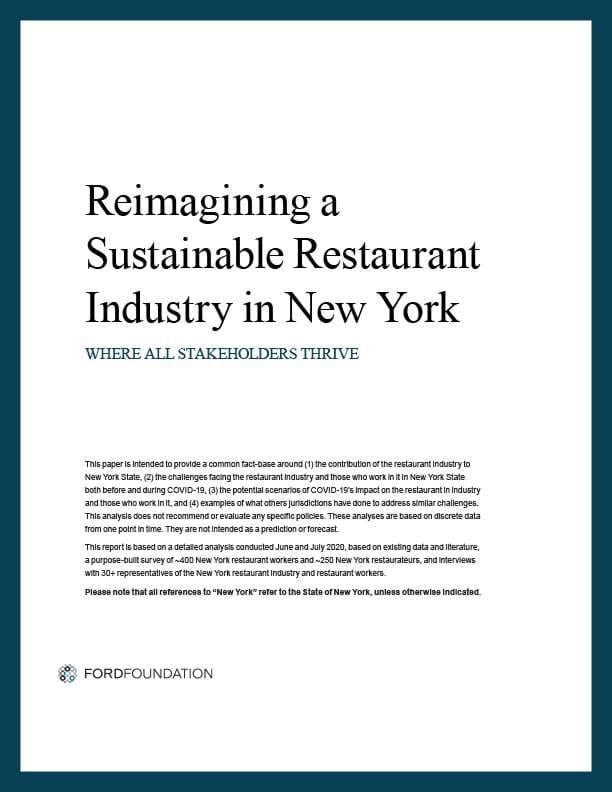 Restaurants are critical to the cultural vitality of New York, and a major driver of the economy.

In 2019, restaurants created $76 billion in GDP and supported more than one million jobs in New York State. Over the past 20 years, restaurant employment in New York grew 60 percent and accounted for about 20 percent of the state’s total job growth.

New York City is famous for its cultural diversity. A major pillar of this is restaurants, with at least 94 national cuisines represented across the city.

This deep, protracted decline has translated into substantial job losses, especially among low-income workers and people of color. By April, almost 70 percent of low-income restaurant workers in New York had lost their jobs, and, as of early June, restaurant employment remained down more than 50 percent.

These impacts reveal deep structural issues within the industry that have long challenged both restaurant workers and owners.

Workers have struggled with below-cost-of-living wages and tip inequities, limited (or no) benefits, race and gender inequities in wages and worker treatment, and job instability.

What’s in The Report

The Ford Foundation commissioned a study surveying nearly 400 New York restaurant workers and 250 New York restaurateurs on the needs and conditions of workers and employers in the industry, both before and after the COVID-19 shutdown. The analysis, conducted by McKinsey & Company, also documents opportunities and potential paths forward to address some of the longstanding challenges that have plagued the industry so that it comes back from COVID-19 strong, sustainable and equitable for all stakeholders.