Our grants | Our work in Detroit

Explore this Topic drop down options ×

Our history in Detroit

The Ford Foundation was established in Michigan in 1936 and operated out of locations in Detroit and Dearborn. After our headquarters moved to New York in 1953, the foundation maintained close ties to Michigan, supporting many economic, civic, and arts organizations working to advance local opportunity and prosperity.

In our earliest years, the foundation’s investments in Detroit funded Henry Ford Hospital, the Edison Institute, and United Foundation. In the 1940s we began supporting an increasing range of the city's cultural and community organizations, including the Detroit Symphony Orchestra and the Detroit Institute of Arts. While this support continued, starting in the 1950s investments in area colleges and universities and the public school system were aimed at revitalizing communities through education.

The convulsive riots of 1967 left the city deeply scarred and divided, but the greater Detroit community took steps to form coalitions across traditionally competing interests and pull itself together. Among the many new organizations was New Detroit, to which the foundation gave early and substantial support. The organization’s work led to major innovations like “people-first transportation,” which helped hard-hit communities gain access to employment and other opportunities. The foundation also supported programs to relieve unemployment in the African American community and promote minority enterprise and school reform. Our minority business development program helped establish Detroit’s first African American-run bank.

In the 1970s, we supported the establishment of a “productivity center” for the City of Detroit, an innovation then typical in the private sector but in its infancy in government. Throughout the 1980s, we continued to strengthen our support for educational institutions, including the city’s public schools. Grants to Wayne State University and the National Chicano Council on Higher Education supported opportunities for minority students, as well as research into their experiences in higher education. 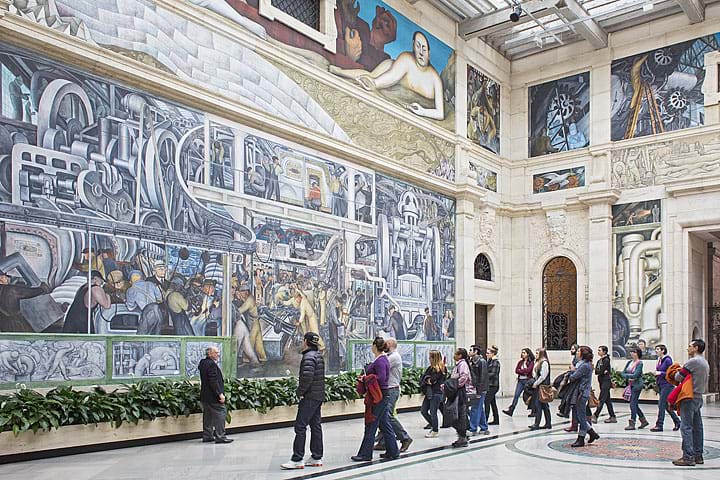 Launched by the foundation in 1990 in Detroit and three other cities, the Neighborhood and Family Initiative (NFI) was created to revitalize inner-city neighborhoods by empowering local residents, developing local leadership, and mobilizing broad participation in neighborhood-based comprehensive development programs. Working with NFI, the Community Foundation for Southeastern Michigan supported community development initiatives in some of the city’s poorest places. These projects encompassed economic development, parenting skills and family programs, tutoring, youth leadership, and the lesbian, gay, bisexual, and transgender community. The Community Foundation continues this important work today and remains a Ford Foundation partner.

In more recent years, grants to Detroit have funded community development work led by the Detroit Local Initiatives Support Corporation (Detroit LISC), research projects by the University of Michigan, and the transformative RiverWalk project. In 2013, knowing that the city was losing sorely needed federal grant money, Ford provided a grant that enabled the city to bring on an oversight team to better manage Detroit's federal funds. Our support for Wayne State for its Detroit Revitalization Fellows has helped connect talented midcareer professionals with local organizations that are committed to the city’s ongoing transformation and future economic development. And our investments in the New Economy Initiative support efforts to build a network of support that helps businesses grow and thrive, while connecting them to each other and the people they serve.

In 2014, the Ford Foundation committed $125 million over 15 years to the city's Grand Bargain, an agreement between foundations, city officials, unions and retirees, and the state legislature to help resolve the city’s bankruptcy. The investment was designed to help Detroit turn the page on years of financial mismanagement and poor governance and secure a better chance of strengthening democracy, participation, and opportunity for all its residents as it emerges from bankruptcy and looks to its future.